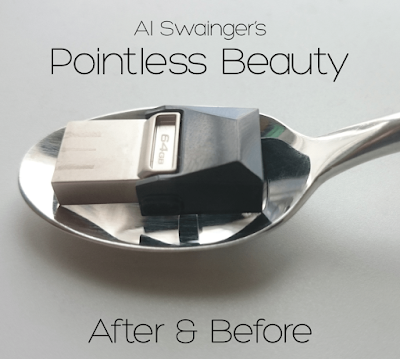 Tomorrow I’ll have the huge pleasure of seeing legendary guitarist John Etheridge playing with the Blue Vanguard Trio in Exeter [see all reviews of them and venue here], and I’m sure that gifted bass player Al Swainger from this superb house band is even more excited than me. He and the others will, as ever, slip into an extraordinary musical bond with their guest player.

It’s been another pleasure to be listening over the past few months to Al Swainger’s Pointless Beauty After & Before jazz album, hearing his composition talents as well as the skilful playing I’ve heard live, and on this album accompanied by more excellent musicians

Too Late opens the run of fine songs on this album with some delicate oriental-sounding keys setting an ambient tone, then the percussion and bass pulses before there is a surprise vocal scat from Swainger to add its own punctuations, followed by more classic bass plucks. I’m searching for a defining term beyond its wrap-around comfort – and that gets near – but it is a filmscore to the movie inside your head as you listen.

Next Sonhos Estranhos is set in its opening keys by George Cooper and the trumpet of Neil Yates, late-night jazz territory, and then joined by Mike Outram on guitar picking out the candlelight and conversations. It’s a soothing piece, mellowed out by craft and feel. Spring Cleaning follows this, a more staccato and upbeat sweep, the trumpet and keys dancing in tandem across their melodic lines. The bass picks up this echo as Yates’ trumpet goes into a literal one, reverberating wonderfully before re-entering in near-squeals and a sustaining of the pace, Outram running alongside. This trio of songs, all composed by Swainger as the rest to follow, establishing the high quality of that writing and the collective musicianship.

In the tracklist, the next ‘song’ The Rockpool stands on its own, separated from the others, and its glockenspiel with sound recording of waves and an impending storm also set it apart, and as a very incidental observation, this atmospheric injection crept its way into a prose piece I wrote shortly after listening to this when sitting outside on a recent balmy early summer’s evening, and I'll put in the whole as it all applies, but it's clear when this track emerges,

I went outside into the warm evening to read a book of poems and possibly write about them but I soon reclined in the lounger and dreamed of falling asleep listening to jazz. Earlier I had driven to the seaside with the car’s top down playing a selection of long, slow blues. I parked at the most distant part of the promenade with the sun hot on my right-hand side and looked out to sea at people standing on surf boards and paddling, their dark shapes set against sun glistening off the surface of rippled water, and for that moment this was in the ascendancy. At home, not having gone to sleep, no one came around to surprise me and say hello. A jazz song playing had a glockenspiel, though perhaps it was programmed keys, and there were recorded sounds of waves with seabirds calling and a storm breaking. The horn later on sounded like echoing from long ago.

and I will never forget that moment of being dreamily affected by the interlude of this which segues into Time Considered, another gentle trumpet-led instrumental that soon rises to its emotive top notes as the piano glides beneath. The penultimate song Cyrano has a lovely synthesised keys segment, and Swainger’s bass playing is highlighted with some delightful runs in and out of the fusion swathe that follows, Mark Whitlam controlling the paces with his continued sharp drumming. The song drops off that fusion stride to more in the mellowed hitherto, just before Outram returns to spark it all up again, the synth revisiting, and the drums roll out their perfections.

You know, this is all good enough to be enough, but the album ends on the twelve minutes of its exquisite title track. It’s a mix of ethereal bliss with piano lines and bass drawing long lines and wavering notes of guitar in its rise and a fine conclusion to what is an absolutely standout jazz album. 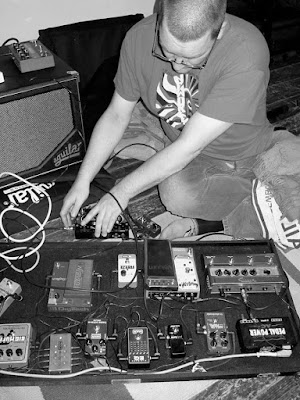