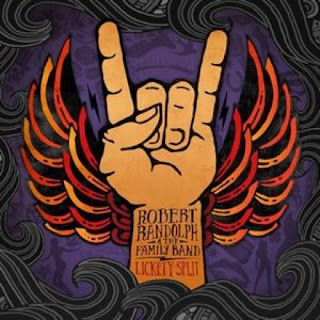 This is a funked-up, lively offering. Opener Amped Up is self-explanatory, and has delightful echoes of Prince in its excitement, whilst second Born Again begins with superlative bass lines and Randolf’s pedal steel before launching into another echo, this time holding up a melodic mirror as it runs along the lines of Stephen Still’s Love The One Your With and awaits, presumably, the serving of a plagiarism writ. Third New Orleans mixes an Hawaiian tinge into the pedal steel whilst adding injections of rap, and the eclecticism is established.

Fourth Take the Party is perhaps more New Orleans in overall sound than its predecessor with those horns, vocal shouts and soulful chorus, but it is Randolf’s scorching pedal steel that whips and wheels about most distinctively. The most funked-up funked-up track is fifth Brand New Wayo which is more instrumental than most, and not surprisingly as it features a blistering duet with Carlos Santana as well as virtuoso bass from Danyel Morgan.

There’s more from Carlos on Black Joe, a slower track where the fire is oddly doused by the blandness of the melody and the dirge of the singing. A strange aberration continued, unfortunately, in repetitive follower Love Rollercoaster where the empathetic heights are not attained.

Ninth All American returns strongly again in Prince mode. Tenth Get Ready is Randolf’s pedal steel assailing that instrument’s and his playing’s impressive heights, segueing into and out again from a gospel interjection. Superb. Penultimate Welcome Home has some beautiful soul singing with harmony, and the pedal steel whirls around within to weave that traditional sound to its own distinctiveness. The album closes on The Rascal’s Good Lovin’, a great song given an appropriate upbeat performance and sounding so similar to Born Again which sounds like - well, you know - it has got me wondering if Stills was ever or should still be looking over his own mirroring shoulder. 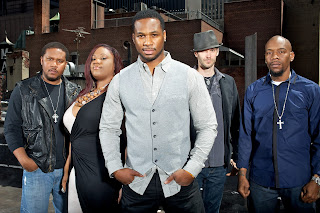 Guy Clark - My Favorite Picture of You 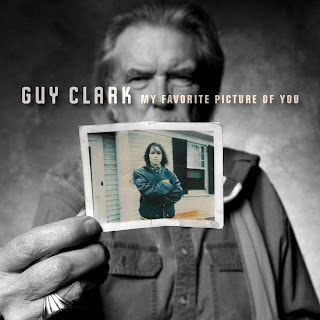 The septuagenarian troubadour Guy Clark presents another masterclass in understated excellence with these simply played tunes that capture, for example, the delight of a country waltz or the tender reminiscence of a recently departed and adored wife. The latter tribute is the album’s title track and recalls Guy’s beloved Susanna whose Polaroid picture is the focal point of the album cover, a snap taken in the 1970s as she stormed off having found Guy and great friend Townes Van Zandt together, very drunk – you never left but your bags were packed, just in case...there’s a fire in your eyes, you got your heart on your sleeve, curves on your lips...all I can see is, beautiful...a stand-up angel who won’t back down. Such loving reflection and wisdom is presented, at varying levels [*], throughout all ten self and part-penned tracks, including fifth Heroes that demonstrates Clark’s storytelling candour as he sings of a returned Iraqi war veteran, its familiar but nonetheless apt portrayal of the cruel ironies of such ‘heroic’ status avoiding cloying patriotism, yet it still honours and respects the commitment and sacrifice made. It’s a view that has the grace and objectivity of many other preceding American singer-songwriters, and which Clark continues with consummate ease.

* The blues infused I'll Show Me is 'wise', perhaps, in its wittier observations - I'm all decked out with my slack britches on: don't get lucky, man there's something wrong....! 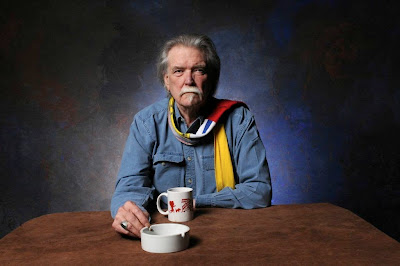 Email ThisBlogThis!Share to TwitterShare to FacebookShare to Pinterest
Labels: Guy Clark - My Favorite Picture of You 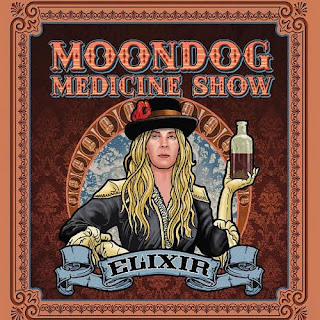 Here’s another one of those under-the-radar great bands, playing bluesrock that references the past but keeps it dynamically relevant today. Dynamic in the classic female rockruff vocal of Lana Spence and in the excellence of the band, especially the impressive guitar riffs from Joel Newman. Hailing from Western Maryland I’d expect they have a loyal, drooling following there and abouts. It’s how it goes, but the radar needs to pick this band up and broadcast the class widely. 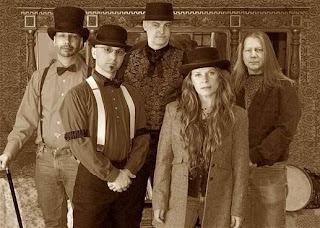 Travis Tritt - The Calm After 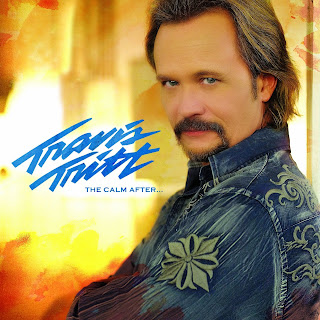 Here I am in musical hog heaven, always a fan of Travis Tritt [saw him at the Jacksonville State Fair, oh years and years ago] and now enjoying his latest because his Country is steeped in Rock and swelled to Outlaw authenticity with his enthusiasm for keeping it raw and real – OK, there are the mushy ballads too, but that’s part of the bigger deal – and here we have him covering the Faces Stay With Me just to prove my point. That revelation may well have made the odd reader choke, but suck it up disbelievers. Listen to the Country blues of chugging Doesn’t The Good Outweigh The Bad and tell me the foot ain’t a-tappin’. Go on, don’t be embarrassed. Rub Off On Me is another honky-tonk rouser, Tritt’s gruff vocal at ease with its natural Country sass. The Storm powers in with organ whirls and a pounding trajectory – this song the title for the album originally planned for release in 2007, but owing to a failed company and consequent litigation, it now appears on the satirically named and finally released The Calm After.... Penultimate High Time For Gettin’ Down is a classic slice of Country Rock, with occasional fiddle, and the album closes on Somehow, Somewhere, Someway, a classy blues stomp with superb guitar licks – and solos - and more organ swirls.

I admit I’ve not featured the ballads, but they’re for another mood. For now I’m cherry-pickin’ the genuine rockers that define this genuine Country legend. 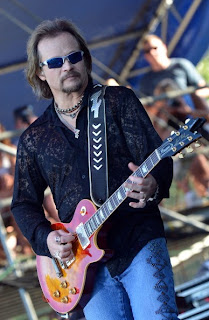 Email ThisBlogThis!Share to TwitterShare to FacebookShare to Pinterest
Labels: Travis Tritt - The Calm After 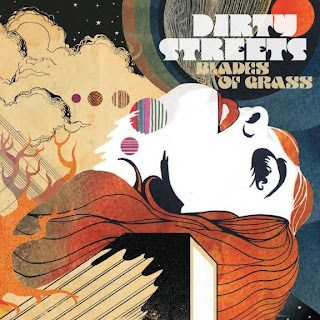 The rock revival rolls on, gathering no moss, and the iconic trio tradition provides both image and musical impetus for Memphis band Dirty Streets’ latest Blades of Grass. As I’ve said many times before about similar retro-rock [most recently regarding Indigenous] it’s not new, but it doesn’t need to be. This being the case there will always and inevitably be echoes, and here is it is like a further layer of retro/revival as this band, largely through the vocal of Justin Toland, sounds like The Black Crowes who themselves established the key rock resurgence back in 1989. There is some apt, and for this writer endearing political/social comment about the dangers of living in a world of 'underpaid teachers' in second track Talk; there’s a riffwiff of The Faces in third track No Need To Rest, and penultimate track Twice is a calm psychedelic number [we know this with the sound of a sitar] where Toland on guitar provides a meandering lysergic solo. And as I’ve also said before: far out. 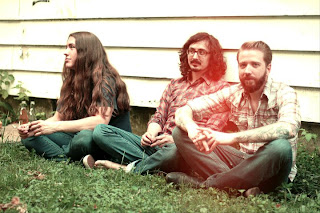 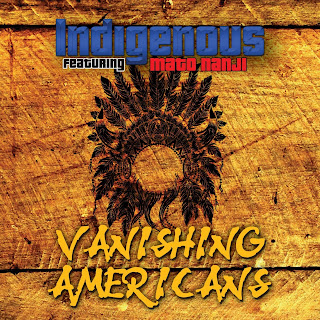 This is a bluesy, hardrock’n’melody album with little that’s new but everything that’s fine and dandy in this genre. The band is led by Native American Mato Nanji whose raspy vocal and resonating guitar inform the sound. The tracks are riff-driven, if you’ll excuse the tautology, and the pace is blues-leisurely rather than metal-brisk, if you’ll excuse the compound formulae. That prime pace is underpinned by the occasional harmonising, as on Can’t Cry No More and my favourite Lonely Road, so you know this isn’t one to rock the party but rather relax you on the long drive home. Eight minute closer Moon is Rising, and second favourite, has some great blues guitar playing, so don’t for one moment think this is soporific stuff: you’ll be flinching your facial chops at every fuzzed inflection. 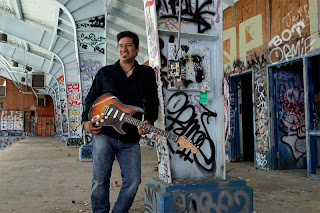 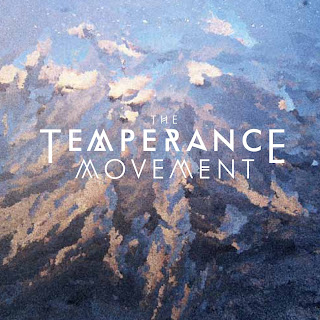 I have ordered my copy, and you can do so here. I don't often promote so explicitly [yet am usually recommending] but on the back of their live gig at the Cavern recently, I am happy to do so this time. The Some Diurnal readership won't make a massive difference [!], but every little bit helps, and this is a band that deserves whatever success they can achieve. 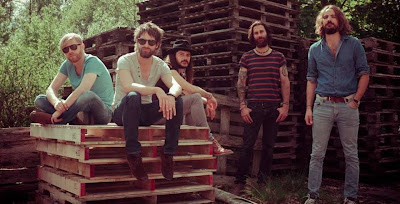 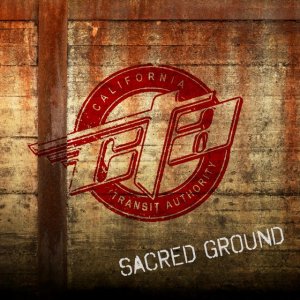 As Chicago ‘lost’ their Transit Authority surname after the release of the band’s classic and outstanding debut double album, it was perhaps fair game for it to be appropriated now for the second outing from California Transit Authority, the band founded by former and original Chicago drummer Danny Seraphine. Joined by guitarist Marc Bonilla, and obviously a host of others, the test of how well this collective wears that appellation with its new geographical location is in the horn section – playing and orchestration – and I think it delivers with an impressive representation of a familiar past. Of course, this outfit’s sound is also more a reflection of the AOR sound of Chicago [like the saccharine penultimate track Go On], post the first three albums, but if you like that you’ll like this. Instrumentals like fifth track Primetime and eleventh In The Kitchen [both superb] echo that rock big band sound best, and there is an interesting cover of I Love You More Than You’ll Ever Know, the song made famous by their ‘rivals’ and other key fashioner of this genre, Blood, Sweat and Tears. Bonilla cuts some fine solos throughout a number of the tracks, and Seraphine’s drumming is, as one would expect, a powerhouse core to the lot. 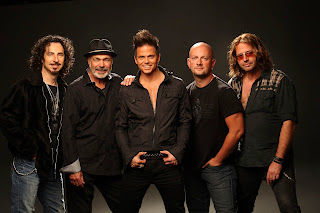