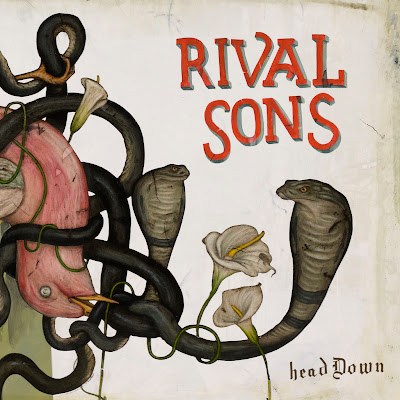 Rivals Sons’ latest album Head Down continues with the raunchy rockriff routine of last year’s popular release Pressure & Time. That said, it is a mature and varied third outing and doesn’t adhere entirely to route one retro-rock, not that this is in any way a bad traverse – take new band Stone Machine’s American Honey as an excellent if singular example of this.

You’d be forgiven for wondering what I’m on about listening to the first two tracks on this album. Both Keep On Swinging and You Want To thunder to tight repeated beats, and the vocal on the latter is as close to the Robert Plant School of Emotional Howl as it could be. And all the better for it. By third Wild Animal, however, there is a West Coast harmonising and 60s pop drum rhythm that breaks the mould. Fourth Until The Sun Comes Up continues that groove with an echo of Steve Miller – it is an upbeat, breezy number that is as much pop as it is rock.

But if you were getting worried about this direction, fifth Run From Revelation returns with pumping drum and guitar and Jay Buchanan belting out that classic vocal. Sixth Jordan is a requisite slow acoustic number, so well within the familiar template, but it does display the band’s songwriting depth as well as Buchanan’s superb voice. Eighth The Heist has all the pomp of a late 60s pop-psyche anthem. Tenth Nova is a two minute acoustic guitar interlude that slows and sooths before the double monument of the next two tracks Manifest Destiny. Here in Part 1 there is a return to vocal harmony, with Buchanan refining his gruff norm to a higher register, and the guitar is expansive in its atmospheric use of effects rather than piledriving a catchy riff. Indeed, there is a wonderful extended psychedelic solo. Part 2, as if determined to remind us of the retro roots, is a gutsier echo of the former, the guitar distorted around thundering drums.

The album closes on the absolutely beautiful True, an acoustic ballad with Buchanan in almost operatic form - more Antony than Plant - birds tweeting in a bucolic background of a song that could have been utterly anachronistic but which here exemplifies the eclectic excellence of the band and this significant release. 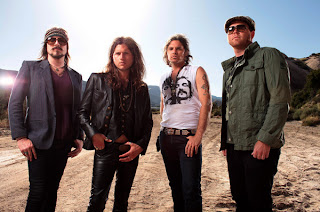 Email ThisBlogThis!Share to TwitterShare to FacebookShare to Pinterest
Labels: Head Down, Rival Sons