Bobby Womack - The Bravest Man in the Universe 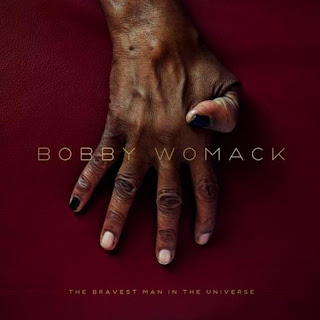 Ahead of tonight’s Later....With Jools Holland on which the very great Bobby Womack is appearing, I’ll make a brief observation on BW’s recent fine album The Bravest Man in the Universe.

It is a musical marriage between Womack’s striking soul vocal and dub beats with other electronic overlays/samplings provided by the likes of Damon Albarn, who I know a little about, and Richard Russell, who I don’t. A stunning example of this partnership is second track Please Forgive My Heart where Womack’s strained but powerfully plaintive soul voice works its magic above a pulsating deep bass and other punctuating sounds, including simply struck piano chords. Most of the songs on this album follow such a pattern and sound, the Womack narrative building emotively in the unravelling of its storyline but also the rising sentiment of the singing – and at this song’s end Bobby briefly plucks an acoustic in his distinctive style. That guitar gets its main workout on next track Deep River, a solo gospel anticipating death and made all the more poignant by Womack’s ill health and age, though it is reported that he is now cancer-free after a colon scare. There is a video circulating on the net of him singing this at his California home and it would be special if he plays this again tonight.

The rawness of that acoustic track is contrasted sharply with fourth Dayglo Reflection featuring the guest vocal of Lana del Ray, and her haunting tones combined with the smooth jazz orchestration reflects the polish that, for me, detracts at times from Womack’s strength – his vulnerable but honest solo performance. That said, such ‘polish’ is more engagingly exercised in tracks six and seven, respectively Stupid Introlude and Stupid, the former a voice snatch from Gil Scott-Heron, and the latter Womack’s musical elaboration.

I’ll finish where the album begins on its title track. When Bobby sings the opening line The bravest man in the universe is the one who has forgiven first - with a cello briefly empathising - the soaring soul in his voice is spine tingling, and as the album concerns itself lyrically with Womack expressing regret for some of the dark excesses of his life, it is a poignant start. I hope he does this one live as well – perhaps we’ll see 2 or 3 on Friday’s extended show. 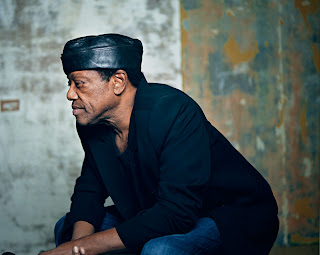 Email ThisBlogThis!Share to TwitterShare to FacebookShare to Pinterest
Labels: Bobby Womack, The Bravest Man in the Universe