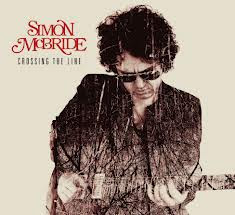 The plentiful avowals for Simon McBride’s rights to various rock thrones – Rory Gallagher, Joe Bonamassa, Paul Rogers to name a few principalities – are as potentially sound as any other predictive plaudits out there. Indeed, with loads of fine retro-rock bands also offered up to usurp their precursors, the fact that Simon McBride as a solo artist can give so many a regal run for their arrogations adds armour to the king-in-waiting accolades.

It is first and foremost his guitar playing that places him so high in the critical if not yet widely public ascendency. Two solid previous albums, debut Rich Man Falling [2008] and Since Then [2010], proffer plenty of credence to his Heavy bloodline, and current release Crossing The Line turns this into a triumvirate’s play for power.

Leaving aside this monarchy metaphor – before I lose my head [sorry, just that last one....] – McBride’s current album displays all the requisites for positive recognition at the very least. His guitar work is varied in its excellence, but essentially blues-based, and there is that felicity of playing that comes with such natural talent. Whether shredding or riding rock riffs, he quite simply succeeds. This is complemented by a strong and maturing vocal that can growl as well as carry a ballad with emotional depth, for example on the bluesy Starve the Fever.

I’ll focus first on the one cover on this album: Blood, Sweat and Tears’ Go Down Gamblin’ gets a guitar and organ revamp from the horn-driven original, and McBride’s guitar solo is a jaunty interlude in a pounding whole. His vocal is fine enough too, and who would dream anyway of attempting to better Clayton-Thomas? Interestingly, the next track No Room To Breathe has McBride exercising his vocal range with considerable umph just to prove that this too is a full part of the package, here ably supported by Mia Simone in the chorus. I started with that one cover because on his debut album he did take the significant risk of giving versions of Free’s Be My Friend and Hendrix’s Power of Soul, both perilous challenges successfully met.

On this album, opener Lead Us Away sirens itself in with a guitar wail and then a thumping beat beneath harmonised vocals, and the guitar solo loops then dances around that chugging rhythm; sixth track Alcatraz has a Latin brass introduction before it moves into its funky chorus-driven rhythms, and the guitar solo here is tightly controlled. There is a melodic focus in many of these songs, as in seventh One More Try, and thus extended guitar rips are not on offer. Indeed, eighth A Rock and a Storm is an acoustic ballad, but the guitar plucking is an equal delight. Penultimate track Home To Me is another slow chugger where the vocal, organ, harmonica and harmonies matter as much as the sweet solo near its end. The album finishes on a reworking of Down to the Wire from McBride’s middle album.

In reality, the various crowns on offer are much too heavy for McBride to wear, especially just for the sake of it. As an Irish guitar maestro, it’s easy enough to understand why the robes of Gallagher and Moore are on offer, but in as much as I find myself complimenting rather than raving in the above paragraph, I don’t think he should be given a King’s spectre to haunt his career. And I apologise for returning to the allusions as well as delivering that smartass pun. 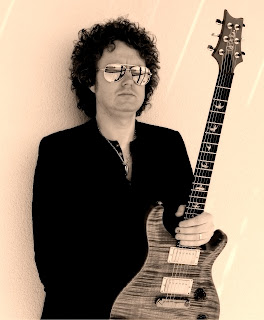