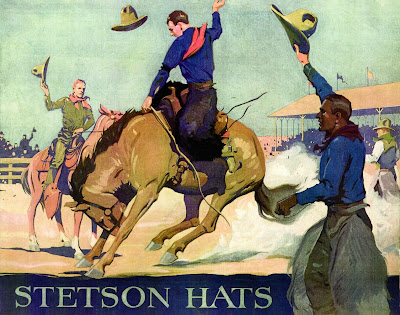 My preceding post was written in the early hours of this morning, thoughts I felt compelled to write and reflecting one pole of my urge to write for this blog.

Not seeming that much later, I was outside early at just after 8am marking further exam papers in the precious sunshine this summer when I almost immediately came across the following. Considering my views expressed on student responses to Slim’s ‘crushed stetson’, you will see in a moment what a salutatory and chastening experience it was to read – quite clearly a genuinely personal interpretation, perhaps prompted by the general notion I had characterised in my post – but fresh and exploratory and convincing. From other writing in this student’s overall response I can tell she/he is not particularly academic, but she/he is certainly thoughtful and intuitive. This is what I love about this paper and these responses.

Before I present it I will state that such work is confidential and thus I am not naming the individual or the school or indeed the exam Board and thus I feel it is apt to offer as illustration, especially as a celebration:

The image that his ‘stetson hat’ was ‘crushed under his arm’ later on ‘smoothed’ out with his ‘gentle’ hands shows he is capable to renew things, the idea on the hat being under his arm creased and crushed yet with the touch of his ‘large and lean’ hands restored right back to normal sets an image that the other workers are the Stetson hat: ‘crushed’ with no enthusiasm, real men worn down by the great depression that was upon them in the 1930s, however Slim took them and protected them which is the image I thought of as the hat was ‘under his arm’, finally once Slim offered a help in ‘hand’ the men became refreshed and restored and inspired to carry on, such as the hat that Slim recovered with his hands.