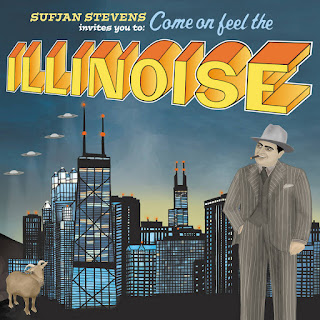 Here’s another quick post, an insert whilst I continue my exam marking. I do often listen to music whist marking, able to both hear and concentrate without any problem, indeed finding the process quite relaxing.

Most recently I have been revisiting Sufjan Stevens, firstly Seven Swans and then yesterday evening Sufjan Stevens Invites You To: Come On Feel The Illinoise. The man has some musical genius about him, producing complex sounds to deliver complex or at least expansive conceptual ideas. Those sounds are so often beautifully harmonised and either as quite conventional acoustic folk or more contemporary electronica. For those who read about my musical preferences here, I lean to the former.

This latter album is Stevens’ second commitment to allegedly record an album for all fifty American States, his first about Michigan, though he has since admitted that this was a ruse. Suffice to say, this is excellent. I tend to respond to the beautiful sound, rather than the lyrics, though there is one clear exception which is the song about the Illinois serial killer John Wayne Gracy, Jnr. The lyrics are quite haunting:
John Wayne Gacy, Jr
His father was a drinker
And his mother cried in bed
Folding John Wayne's T-shirts
When the swingset hit his head
The neighbors they adored him
For his humor and his conversation
Look underneath the house there
Find the few living things
Rotting fast in their sleep of the dead
Twenty-seven people, even more
They were boys with their cars, summer jobs
Oh my God

Are you one of them?

He dressed up like a clown for them
With his face paint white and red
And on his best behavior
In a dark room on the bed he kissed them all
He'd kill ten thousand people
With a sleight of his hand
Running far, running fast to the dead
He took off all their clothes for them
He put a cloth on their lips
Quiet hands, quiet kiss
On the mouth

However, what heightens the horror of this reality and this storytelling is the absolute beauty of the song itself. It is one of the most gorgeous melodies I know, and the tension generated from this paradoxical marriage of such prettiness with such painfulness is genuinely affecting. Do have a listen. The euphemisms used in the narrative have their figurative impact accentuated to the most poignant degrees by this juxtaposition of beauty/beast. This is heightened further when the closing lines convert the narrative from third to first person suggesting, as Stevens himself has declared, that we all have the potential for such evil. Not an original concept, but memorably realised on this one song. 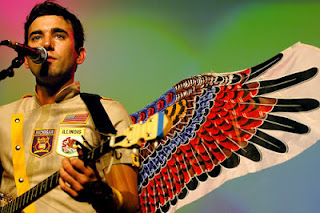 Email ThisBlogThis!Share to TwitterShare to FacebookShare to Pinterest
Labels: Sufjan Stevens - Sufjan Stevens Invites You To: Come On Feel The Illinoise