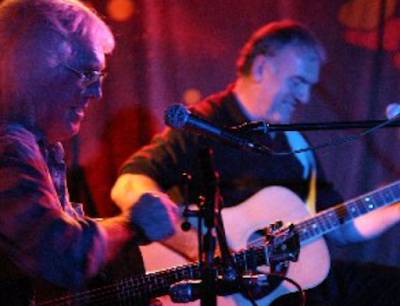 Ralph McTell and Wizz Jones each have their individual legendary status, and playing together there is such a depth of talent and experience to provide. And they did. In summary, the two hours of performance were delivered as a charming, anecdotal narrative of their individual and shared musical roots and experiences, illustrated then by the songs, either independently or shared. Each continually conveyed genuine humility as well as mutual appreciation, and at this purely personal/personality level, the two were engaging, warm, humorous, and also instructive about musical history, from songwriting and songwriters to guitar techniques.

One pervasive impact from the night, for me at least, was a sense of history and context. Without overstating – indeed, far from it – a few of the songs reflected poignantly, and sadly, on current events, for example the performance of Willy Guthrie’s Deportee about Mexican migrants working in the USA and then sent back home once their hard work and exploitation of that had been completed,

The sky plane caught fire over Los Gatos Canyon,
A fireball of lightning, and shook all our hills,
Who are all these friends, all scattered like dry leaves?
The radio says, "They are just deportees"

Another, Pete Seeger’s He Lies in American Land, tells the story of an immigrant man, husband and father, who travels on his own from Europe to work in Pennsylvania, in McKeespot making steel, but dies before his wife and family arrive to join him. As McTell and Jones didn’t need to extrapolate further to make the broader, contemporary relevance, I won’t, but when this Seeger song was song, the weight of current events made the performance resonate with sadness, and more,
Ah, my God what is this land of America?
So many people travelling there
I will go too for I am still young
God the Lord will grant me good luck there

Wizz Jones at 77 still plays a mean guitar, and this came to the fore on his solo of Mance Lipscomb’s ‘Bout a Spoonful [which made me recall my comments here on Dixon’s song performed by Cream], an authentic sense of the blues brought alive in his playing. Another sweet song he played was Night Ferry, and he also played When I Leave Berlin, recounting then and throughout the gig his and Ralph’s time playing in Germany, and also recounting how Springsteen played this at his Berlin gig in 2012, without acknowledging Wizz as the writer. He did so with a laugh, and I think it was a genuine dismissal from a genuine great.

Ralph McTell at 73 also played some gorgeous guitar, a great blues on his The Ghost of Robert Johnson, and once on his 12 string. The highlight of his on the night, and I am astonished I didn’t know the song – but I do now, and throughout this morning with repeated listens – was the beautiful From Clare to Here. McTell’s voice has over the years settled to a resonating bass and it was wonderful to hear the fulsome delivery live. Both he and Jones told anecdotes of how they came across songs of theirs [as with FCTH] in songbooks stated as traditional Irish songs. Again, in that shared humility which ran throughout the night, they expressed complete satisfaction with this.

Scroll down just beneath this for videos of two great performances.
Posted by Some Awe at 12:08