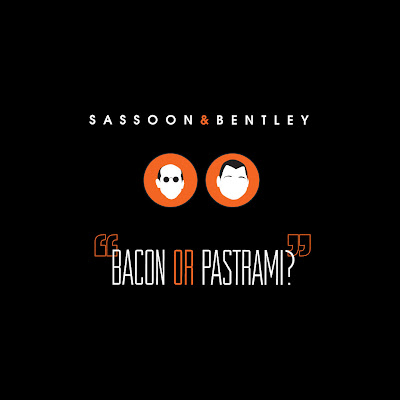 The meat-choice in the title of this album is as contrived a dichotomy as the Jew/gentile biographical bifurcation presented - tongue-in-cheek - in the booklet that comes with this neatly packaged and superbly played recording of the Jeremy Sassoon and Paul Benley musical partnership.

Their respective Manchester United vs Liverpool football divergence is also replicated in body shapes but this spurious tug-of-war stops when the music starts and the symbiosis gets played out in this fine album.

I've written about Paul earlier and also Jeremy as I have discovered more about the shared history of these two. 'Bacon or Pastrami?' was recorded in 2009 and may actually be the final reflection of their union, but more on that later. Having received this cd a few days ago I have been listening regularly since, along with their 'Crispy Duk' cd also referenced in this blog, and I now have a fuller appreciation of their joint work, but also Paul Bentley's brilliance as a vocalist which is where I started with his album 'Come Sunday' and my happy experience of his live Manchester Festival gig in 2006.

'Bacon or Pastrami?' starts with two standards 'Let The Good Times Roll' and 'I've Got You Under My Skin', familiar and essential Bentley territory. The third track is 'And I Love Her' and you are immediately in that other territory - also explored in this blog - where one can ask if it is the excellence of the song itself or this version that distinguishes the track here? The question is, however, as fragile as the mock conflict of the album title and player biogs because such a famous original would seem to preclude a striking cover, but Benley's vocal is perfect here and compliments that famous melody. Put more simply, it is a worthy partnership and that's all that matters, 'partnership' being a key theme of this review. I especially like the Richard Hammond bass line, penned by Sassoon, and it's therefore no surprise it echoes the fine bass on the 'Crispy Duk' version of 'Summertime' played there by Sassoon with right hand keyboard and left hand bass simultaneously.

The next track 'On Broadway' continues Benley's covers confidence but also has that solid Sassoon keyboard support that is initially understated and then becomes more punchy as it leads into its instrumental. 'Spider Man' provides a playful interlude and the next track I want to highlight is the version of 'Nearness of You'. This, for me, showcases the simple strength of Bentley's vocals and the overall song arrangements. That vocal excellence is clarity, timing, and the held notes. This is complemented by the tight keyboard/bass support and sultry solo spot which rises to the rhythmic crescendo of the last sung verse with closing cascading keyboard lines.

I should mention and credit here Iain Dixon who penned the larger band arrangements, with Sassoon focusing on smaller band ones.

Throughout this and the other two albums mentioned the musical success is also built on careful song juxtapositions, but you'd expect that to be a given. The eleventh track 'Don't Set Me Free' has two sweet sax [Iain Dixon] and trumpet solos so that's a good example of this professional balancing.

The album ends with 'Amazing Grace/I'll Fly Away' and presumably caters to Bentley's gospel affinities. Sassoon lays down the melodic line with keyboard on its own to signal this simple gospel link, and the track is performed with just the partnership of this simple pair - voice and keyboard - and, in the end, this represents the perfect performance sandwich whatever its paradoxical mixture of historical, cultural and biographical ingredients.

The portion of this final track 'I'll Fly Away' fades quite quickly and it is genuinely sad to report that this is in some ways metaphoric of Paul Bentley's decision to no longer gig, a fact I have only just picked up. I have no idea if he will continue to record but I obviously hope so.

Finishing on the food analogy, pastrami is distinct enough as a cold-cut to survive on its own, and to keep your taste-buds tuned to the work of Jeremy Sassoon you can peruse his forthcoming musical menu - recordings and gigs - at www.thejazzprescription.co.uk, though his other site currently under construction www.jeremysassoonmusic.com will soon be the place to visit for current news and future projects

Email ThisBlogThis!Share to TwitterShare to FacebookShare to Pinterest
Labels: Bacon or Pastrami?, Sassoon and Bentley