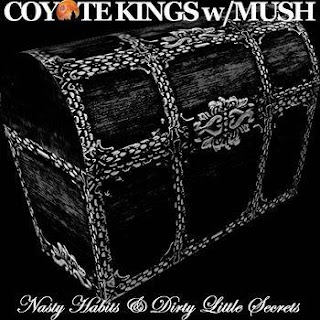 Here’s a funky and rootsy blues band that exudes a musical cool which, excusing the oxymoron, sweats off the knowing journeymen-warmth of a trio of fine musicians and a singer whose voice was brought onto seven tracks in their previous album and now gets a ‘w/Mush’ nicknamecheck on current cover to signal her significant contribution to their overall sound.

There are fluid to fiery guitar rhythms and licks from guitarist Robin Barrett who also writes all and sings on some songs; Curtis Johnson is the powerhouse drummer; Kit Kuhlmann is on lively bass, and Michelle ‘Mush’ Morgan adds the requisite welcome sass with her vocals. 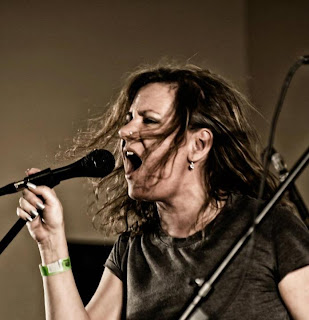 Good blues is good blues and if you like that you’ll like this but beyond such neat symmetry there is a special sound with Coyote Kings which I’ll take back as the most apt description to the previously mentioned fluidity. It is largely in the guitar sounds which are laid back in essence even when emerging from that state of blues grace with their wilder calm. Perhaps it’s a distinctive tension, and something embraced in the songwriting of Barrett where his style is blues refined rather than blues defined.

Opener Nasty Habit is a thumping [wonderful bass] Stevie Rayesque number, the guitar oozing those refined riffs and Morgan singing her sexually charged suggestiveness. Second Best You Couldn’t Do is smooth again, rhythmic riffs bending blues notes sweetly. On third Hard To Be a Man, Barrett demonstrates his own emotionally infused vocal that can growl with conviction. A great start, and this third number in particular reminds a little of the Mike Bloomfield school of cool blues.

Fifth Baby’s Gone is an emotive ballad, guitar wailing and Mush moaning in another sweet symmetry. Seventh That Hot Daddy takes it’s Time of the Season opening beat and then scorches it with guitar-bent burns, Morgan so close on the mic you look over your shoulder hopefully whilst listening. Eighth Afternoon Sun has Barrett slowing the mood and singing a gentle number, simple in its summery effectiveness. Tenth Walkin’ In The Fog is another slowed blues ballad, this one an instrumental that evokes Gary Moore’s sensitive playing.

The album finishes on Am I Gettin’ Wise and I’d say Barrett’s rhetorical question is answered in the natural wisdom of this assured blues experience. A lovely album from start to finish, and can be bought here.