Jimi Hendrix - Both Sides of the Sky, album review 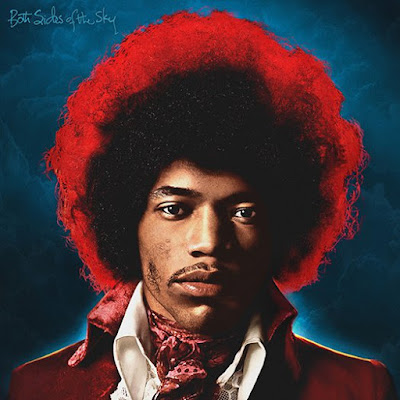 All Sides of the Sky

I’m so enjoying this Hendrix, listening to closer and instrumental Cherokee Mist as I write, Jimi on guitar and sitar, the latter just simple lines, but the guitar feedback is a shrill backdrop of the kind of noise we like from him. Just before this is the wonderful track Send My Love to Linda with its opening Spanish-esque guitar runs, Jimi singing I send all my love to you in a song with tapped chords [or so it seems] and quite straightforward, if sweet –  that is until halfway through and it breaks into a superb ‘classic’ Hendrix fuzzed jam [a production splice?]. The song is apparently well known, but not to me having not followed the countless other releases over time.

The music is via recording sessions made over a couple of years from 1968, just after the completion of Electric Ladyland. Other gems are the blues of opener Mannish Boy, Jimi in good voice, especially when tagging the guitar lines; there’s a potent version of well-known Hear My Train a Comin’, the fuzzed notes in languid runs and bends, plenty of crying and yowling lead later on; Stepping Stone has the sound of his earliest work a la Are You Experienced; Stephen Stills is guest vocalist on his own $20 Fine – beautiful – as he is again on a superb pre-Déjà Vu outing of Joni Mitchell’s Woodstock with great organ and an even greater bass played by Jimi.

It’s all pretty damn good, obviously: an interesting spaced-out version of Power of Soul; Things I Used to Do duels with Johnny Winter on slide, and Georgia Blues is expanded beyond the usual with saxophonist and singer Lonnie Youngblood very much in the lead and delivering plenty of vocal and sax sass.

I’d say All Sides of the Sky better sums up the space Jimi’s music continues to and will forever occupy. 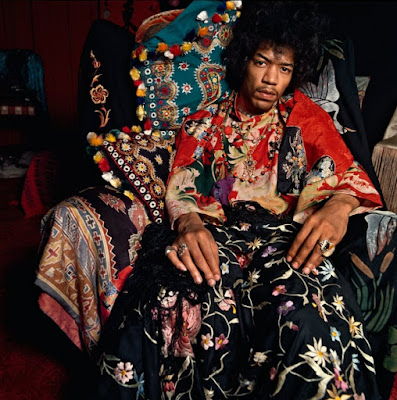 Email ThisBlogThis!Share to TwitterShare to FacebookShare to Pinterest
Labels: album review, Jimi Hendrix - Both Sides of the Sky