Steve Earle - I'll Never Get Out Of This World Alive 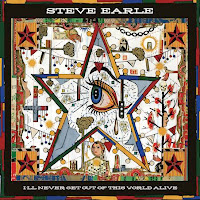 I'm posting a fuller review of this album compared with my recent previous if anyone is interested - it's because I've been posting reviews on amazon co. too and occasionally, as with this one, write in more detail:


The art of platitude, twice: Steve Earle is a brilliant songwriter; every Steve Earle album is superb. That nutshells the man and his latest album, I'll Never Get Out Of This World Alive. Surely Earle has usurped the 'outlaw' mantle from Waylon by now, and this album continues the raw and robust countryblues of his oeuvre to date, adding, as always, folk and bluegrass to complete a full palette of musical narratives. The 'outlaw' tag has more credibility with Earle too in his political commentaries, here represented by the acerbic Little Emperor that places George W in his proper political place [and this isn't satire; it's sincere judgement]; and The Gulf of Mexico which is a more reflective but nonetheless serious observation on the BP oil spill and its consequences.

My personal view is that Earle's finest song to date is My Old Friend the Blues from debut album Guitar Town, and on this latest T-Bone Burnett produced collection - Earle's first since his tribute to Townes Van Zandt - the ballad Every Part of Me challenges in its beauty, both musically and lyrically. It declares a more positive force in life compared with the former where 'Lovers leave and friends let you down'. In a hard life - heroin addiction, time in jail, married 7 times - to now write 'I love you with all my heart, all my soul, every part of me; it's all I can do to mark where you end and I start' reflects that Earle has found a blessing when he 'didn't think this kind would ever find me'.

Other wonderful tracks on this album are Lonely Are The Free, I Am A Wanderer, and Heaven and Hell, a duet with wife Allison Moorer who is the subject, presumably, of the most puissant line from Every Part of Me: 'I can't promise anything except my last breath will bear your name.

Those who might query the 'outlaw' tag would presumably point to his more popular sojourns into cameo performances in The Wire and more recently Treme. This would seem pretty churlish given, as I have already referenced, Earle's clear and sustained commitment to political views and causes. I mention this because of closing song This City written for Treme. However, this also carries the full weight of sincerity and the artist's craft not being compromised by commercial considerations. I watched the final episode of Treme this week and as This City played out the closing credits it was particularly poignant because it empathises so completely with the story. There is a wonderful cameo in this episode where Earle is in the process of completing his writing of the song.
Posted by Some Awe at 18:35

Email ThisBlogThis!Share to TwitterShare to FacebookShare to Pinterest
Labels: I'll Never Get Out Of This World Alive, Steve Earle