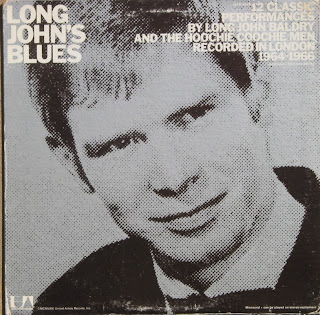 I arrived in England in 1967 and one of the great English pop ballads that occupied radio, TV and teenage ears at the time was Long John Baldry's 'Let the Heartaches Begin'.

It wasn't until much later that I rediscovered Baldry and his blues roots and the breadth of his musical experiences and recordings. And this morning I have been listening to Long John's Blues, his debut album recorded in 1964.

Stand-out tracks from a stellar whole are 'You're Breaking My Heart' with great band support and Baldry's bluesy vocal range in full play; a moody and punchy 'Bring My Baby Back'; 'Five Long Years' with my own harmonica accompaniment adding much self-satisfaction, and the sultry 'Gee Baby Ain't I Good To You'.
Posted by Some Awe at 11:09