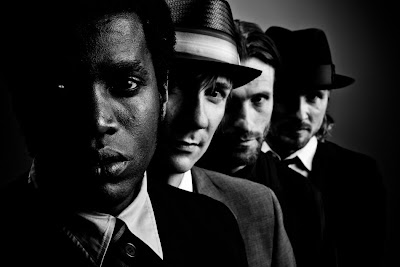 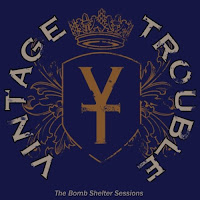 Having referred to vintage Steve Miller in the previous post it is apt to comment on the same adjectival sounds of new band Vintage Trouble in this one.

Like many, I saw this tight outfit performing brilliantly on both editions of this week's Later....With Jools Holland, Friday night's giving us a full blast of their superlative rock n soul. Again like many, no doubt, I have downloaded the album [from Amazon] and am revelling in the exuberance and excellence of it all.

The scorching rock guitar riffs and solos of Nalle Colt are complemented by the ballsy bass of Rick Barrio Dill and the succinct drumming of Richard Danielson. Vocalist Ty Taylor has both a roaring as well as sweet soul voice: tracks 'Blues Hand Me Down' and 'Nancy Lee' - both aired - present the raucous side; the glorious 'Gracefully' reminds me of Otis and Sam in this vintage reincarnation of that traditional sound. In performance, James Brown will kick to mind.

Indeed, Taylor's vocals remind me of another 'then' new kid on the block, Terence Trent D'Arby who didn't attain the popular or critical success he deserved for his singing at least, and I trust this won't be the case with this band because there is so much more I'd want to hear over the coming years, not least seeing them live which is the palpable real treat.
Posted by Some Awe at 12:13