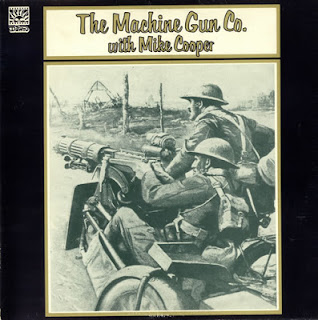 With the melody of Tim Buckley and the vocal sound of Country Joe McDonald, opening track Song for Abigail from The Machine Gun Co. With Mike Cooper, released in 1972, could seem as far musically from Cooper’s latest release [previous review] as it is in time. But it isn’t as clear as that: the biggest difference is in the vocal register where that earlier folk alto has dropped to a gutsier blues tenor; the guitar work is quite different though his definite skill is the same, and the jazzier improvisations indicate Cooper’s more experimental movement through his career, and of course in his recent work. Second track The Singing Tree would seem even more distinctly different – as relatively conventional – apart from the freeform sax solo running through its latter stages. 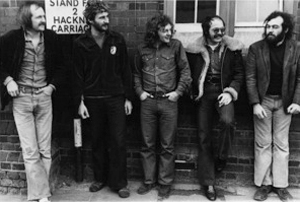 Third Midnight Words offers more of the McDonaldesque vocal warble, and a contemporary countryfolk tinge, though that pesky avant-garde saxophone asserts itself again. It’s the fifteen minutes of fourth track So Glad [That I Found You] which signals the more experimental trajectory Cooper would take and which I so enjoy in his latest release Radio Paradise. As a song, So Glad.. encapsulates the mix of the whole album: there is a straightforward folk melody, but this is wrapped within an opening jazz/funk/electronic salvo, and then after establishing that melodic centre at about four minutes in, there is a return at six minutes to a jazz improvisation where the saxophone of Geoff Hawkins [long time friend and collaborator], which has teased elsewhere, becomes a more prominent and wonderfully wild element squealing and screeching and reverberating. At twelve minutes there is a reprise of the ‘song’ and the track then draws to a slowing, freeform close.

Final number Lady Anne is a classic slice of folk beauty – but skewed by the saxophone here gently wailing as if there is a tension at breaking point between the directions it should take: the melodic, electric piano layered folk tune, or that light squeal of sax and what it suggests of beyond. 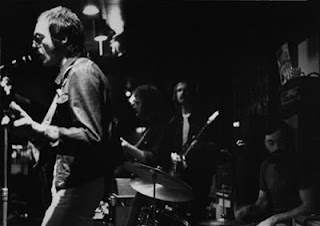