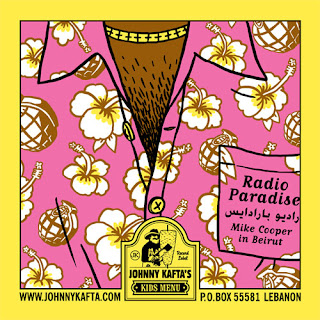 This is special because it is special: the blues are in the mix always as a variable core, and the picked/slide guitar work is also at various moments distinct, precise and impressive [e.g. on fourth track Special Rider which is the most ‘conventional’ cut of the six on this album], but what delights and teases at the same brilliant time are the effects which are electronic and experimental – and for the geeks, perpetrated by use of Kaos Pad, Zoom Sampletrack, and Boss Pitch Shifter pedal.

I’m sure there are many precursor echoes of which I am totally unaware – though I want to stress this is overall a unique sound to me – but at times I am reminded of the Third Ear Band and their Music From Macbeth soundtrack. There is perhaps another touchstone with Captain Beefheart, especially on the 15 minute Migrant Song/Heartbreak Hotel. Cooper complements this brilliant guitar-with-effects sound with superb vocals as on opener If I Get Lucky, and these are even more central to the blues core.

The merging of Cooper’s playing on his acoustic and electric lap steel with the electronic manipulations is subtle in as much as neither dominates nor, if this makes sense, detracts from the other. Both are simultaneously distinct, and Cooper would seem to me to be virtuoso across both approaches as these are played and recorded in ‘real time’: there are reviews out there from those much more informed and adept at the technicalities of this playing should anyone reading this want to find out more. In my more layman’s aural understanding, and thinking of the recent death of Ravi Shankar, it occurs to me that these also have the repetitive and hypnotic effect of sitar ragas. My favourite track, and one which illustrates this merging perfectly, is second A Dream of Arrival. At eight minutes, the first four do mesmerise with looped and repeated sounds - scratches, bowed strings, other noises - then at 4.02 Cooper suddenly sings over this continued set of sounds [also picking and sliding more 'conventionally on his guitar], and it is a fulsome, jazzblues croon that is wonderful.

Whatever their technical intricacies and various genre mirroring, the six songs on the fine album are compulsive and absorbing listening. Here is difference with substance – and to be linguistically hip it would be fair to comment that Copper does deconstruct the familiar and makes it new.