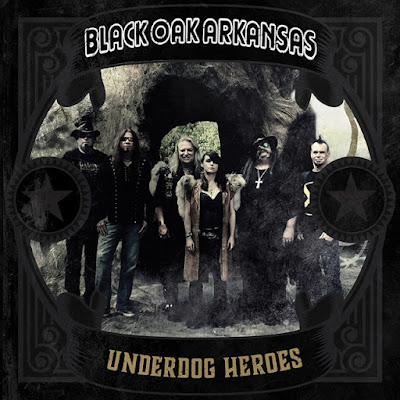 This is a paradox of an album – not good/bad; I think it is damn good – but in the polished/raw qualities it relays: the polish of its production, and the rawness that is inherent in the bass-growl of Jim ‘Dandy’ Mangrum’s signature vocal, here foregrounded throughout and often echoed-up for sustaining effect. ‘To The Rescue’ indeed. There is often a talking pace to the delivery, as in the dirtiest walk of The Wrong Side of Midnight, like Beefheart on a tab of sass. Great vocal support from Sammy B. Seauphine.

Rickie Lee Reynolds and his excellent guitar playing also provides a significant anchor to this album’s success, for example superbly on opener Don’t Let it Show, as is the shredded lightning of a contribution from Shawn Lane [who passed in 2003] on Do Unto Others.

Another ‘narrative’ offering is third track Channeling Spirits paying talking homage to other musicians, and this is a sweetly resonant song intoning a lineage from a range of artists. Reynolds’ guitar work on this is a glorious overlay of lead.

Next Ruby’s Heartbreaker is written about former band member Ruby Starr, a hugely powerful vocalist in her own right, and this is a dynamite tribute, using wonderful catches from the chorus of Grand Funk Railroad’s Heartbreaker as well as Reynolds in Funkadelic’s Eddie Hazel mode. An earlier posting of mine about Ruby can be read here.

If you want it real dirty – so that’s hot ‘n’ nasty – check out The Devil’s Daughter with Seauphine featured on vocal. With lines such as like a blow job from hell, but boy I’ll bite off your balls it is the lyrical poetry of ‘don’t take this too seriously – just fucking enjoy’.

And I am. Nostalgic and nostalgia notwithstanding.

My review of Keep the Faith as a favourite all-time album here.