The Madness of Being Calm 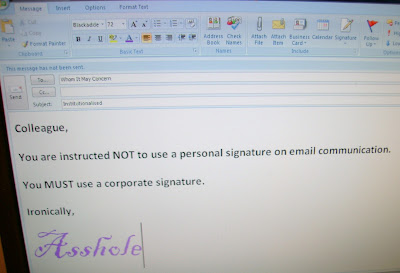 Being institutionalised carries the connotation of having been committed to a psychiatric hospital, but I want to explore its more general implications - though in doing so I think I might be arguing that the connotation does apply, but as a nuance.

I have recently become engaged in an email correspondence with friends and ex-colleagues from the institution where I used to work, having been retired [voluntary redundancy] for about 18 months. The correspondence included me as a former colleague, but essentially an outsider: a sounding board and/or likely protagonist from afar. I was included by a friend and to the probable dismay of one other, and maybe more, having been copied in to a range of people who work there.

The institution is my previous school, an 11-18 comprehensive. This school like all of the other clones now in this country has for some time promoted its specialist status, this one as a Maths, Science and ICT college, and has recently also obtained the requisite, and therefore redundant Academy appellation. My prejudices must already be clear: I despise these shallow namings, and detest the political motivations behind them. It is a sham to imply difference – and the questionable imperative of difference – as well as a political ruse to divide and rule. This is a much bigger debate than the one I want to primarily address here, but there is a pertinent link with the issue at hand.

That issue is the request from the institution for an email ‘corporate’ signature by all of the teachers working at this school. Whilst I have obviously become engaged in the ensuing debate, the central point I want to make is how the difference between being an actual part of that institution and then separate from it, like me [but accepting the nature of my continued connection], has a significant impact on the emotive resonance of that engagement.

Whilst most issues that I find ludicrous – like this one – will resonate in my emotional, intellectual and political sensibilities, I was nonetheless struck by how calm and reasoned I felt with this issue. Had I still been there and some senior manager and/or minion of that ‘leader’ made this request of me, I would have gone ape-shit [and the antithesis in the language I use is critical]. This is what I want to explore – being institutionalised in this sense.

I was involved in the issue when my good friend included me in the email exchange of the argument and stance he was taking against the individual telling him he wasn’t allowed the flowery and purple signature he had chosen: it did not fit the ‘corporate’ identity the school was trying to establish. Something more uniform and plain was being requested. Sharing my free-spirit and liberal views, my friend was not accepting this, and the exchange to this effect was becoming a little heated. And this was being shared across a group of people – me now included – rather than as a private disagreement between two opposing individuals.

My intervention was to try and articulate the feelings behind my friend’s objection, feelings with which I strongly empathised but which I realised I wouldn’t have taken the time to expand upon if still there! If I had been, I would simply have ignored the requests, become incensed and agitated, and persisted with whatever colourful signature I had chosen for myself – quite likely printing this out in large letters and posting around the site. Now perhaps this is simply a realisation of and reflection upon the mad man I was, but I believe it is more an understanding of how being institutionalised aggravates and exacerbates those differences of opinion within a complex organisation – as most schools are – and where there will necessarily be differences of opinion, especially between teachers, managers and non-teaching staff. And this is like all other complex institutions, but it is worth stressing how the inevitable differences of opinion in schools have been corrupted by the increasing reliance on and reference to business models.

Fair enough, this isn’t particularly apocalyptic, but I have come to realise how being outside the institution has allowed me to calm down, and has probably saved me from serious illness, or worse, and prevented me from realising my homicidal tendencies! I am still animated by those political and other extraneous, idiotic observations on and interventions in education, but not being institutionalised by it allows a seemingly healthier distance from which to observe and then comment more calmly. I hope the length of this response isn’t some merely apparent calm and rational manifestation of the same madness I think I have avoided!

I need to return to the pertinent context which prompted all of this. I won’t print the correspondence of others which, although it would be unnamed, should still remain private, but I’ll include snippets of my observations to engage in the argument itself. My initial and private response to my friend included this mildly [for me] emotive counter-argument,

I trust you will retain this absolutely resolute and righteous stance, but not let it get to you. The idea of a ‘corporate’ signature is utterly despicable, and, unfortunately, so predictable. To even use/promote the idea of a corporate signature is painfully pretentious. Of course, I’ve never, never had any doubts that I left at the right time before such nonsense drove me completely bonkers, but this would have lit a conflagration under my sense of always rejecting the pitiful.

My general response included all addressees in that first email from the friend and I’m hoping - because it’s my hypothesis – that it is more reasoned and calm than my already tamer personal response, but also whatever reaction would have exploded if I was directly affected by all of this. This response does reflect on observations made by the individual requesting and advocating the ‘corporate’ signatures,

I don’t believe anyone’s hard work was being denigrated, but the idea of a ‘corporate’ signature is risible. If you have a creative disposition, such a singular and bland representation does grate against that independent impulse. If you’re not creative, you won’t understand this.

When teachers – who are by nature creative: they have to be – have everything in their professional lives standardised and judged accordingly, something as apparently minor but precious as a personal signature takes on a significance. It’s one small way within the increasing formatting of their lives [email correspondence being a prime example] that they can retain some semblance of self.

To conclude, the individual promoting the corporate ideal – and he was following a senior manager’s line, though also obviously in personal agreement with it – did respond to this and invoked the private sector as a model for what the institution was trying to achieve. Any mention of the private sector in connection with education, especially being conjured as a compass to guide - is a bloodred rag to this bull, but that is the point. Had I still been in that institution I would have railed against this with an anger dangerous to all, me in particular. I simply responded by wishing him a Merry Christmas. The phenomenon of this may not be easy to spot in this lengthy exploration, but I know what a personal journey away from the utter madness of being institutionalised this has been.
Posted by Some Awe at 13:27

Email ThisBlogThis!Share to TwitterShare to FacebookShare to Pinterest
Labels: Institutionalised