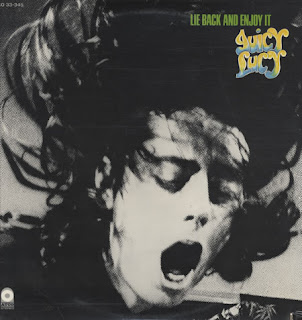 Juicy Lucy - Lie Back And Enjoy It

Juicy Lucy's eponymous debut album has perhaps the critical acclaim from those who champion the band, featuring as it did the top 20 hit and great Bo Diddley cover Who Do You Love. It's a great blues-rock album, but it is their sophomore release Lie Back And Enjoy It that introduced the band to me and thus is my favourite. Before moving on to that one I can't resist posting the inner cover of the band's first album featuring the wonderful Zelda Plum covered in fruit, 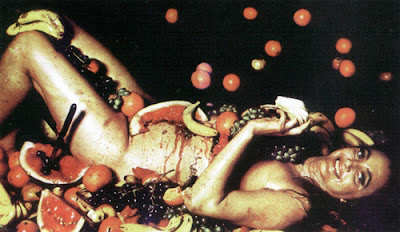 Lie Back and Enjoy It has more occasional but not constant great swamp blues, like second track Willie Dixon's Built For Comfort with gravel vocals by Paul Williams, ex Zoot Money; guitar by Micky Moody; slide guitar by Glenn Ross Campbell, and that screaming saxophone I so liked at the time played here by the brilliant Chris Mercer. It's the chugging bluesbeat that propels this funky song. Third track Pretty Woman is more of a country rock number and is perhaps the reason many prefer the first album's predominately blues selection; and fourth, closing side one of the vinyl, is a light but breezy, slide-driven and band-penned Whiskey In My Jar. Side two opens with a gutsier return to a rock and blues sound, the Davis/Bramlett Hello L.A. Bye Bye Birmingham [and reading the writing credits from the album sleeve is quite a task as it opens out into six album-sized squares, the inner spread a picture of the band in performance with album details, and the outer using each of the six individual squares to present a member of the band - see below]. Seventh track That Woman's Got Something is another band-penned number and is an acoustic and authentic sounding blues with Paul William's vocal growl carrying the song. Eighth is my favourite - and here shouteth the purists in their dismay - a dirty cover of Zappa's Willie The Pimp, Williams' vocal sleazy and slithering. There's some great playing on this with Campbell's rampant slide and Rod Coombes' pulsating drums, including solo with Moody echoing on guitar. Playing this song loudly over and over when I got the album, along with and similarly Built For Comfort, they tend to dominate my recall of the album and represent what is best in it. Overall it's not the most consistently strong or musically memorable of my other selections in this category, but being reminded of the Vertigo cohort, to which JL's first two releases belonged, it still commanded a place for the amount of playtime it got in my early collection and listening leanings. 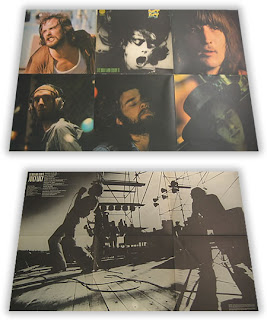 There's a 'Meat Alert' for the next posting which is chronologically but not physically before this one....
Posted by Some Awe at 14:13