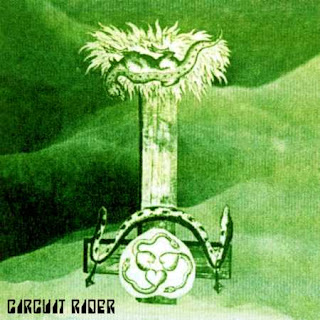 What Goes Round Comes Around

This is a cool, psychedelic/folk/spaced-out recording from a bunch of unknowns, early 70s [*], and the opening few tracks are mainly acoustic guitar, walking bass and jazz drumming, with later tracks including electric fuzzed-out and wah-wahed guitar riffs. The vocal is a gruff amalgam of Morrison, Van Vliet and Jagger - I kid you not - and most tracks sound like home recordings/demos, certainly maintaining a raw and improvisational feel.

Second track How Long, similar to the opener, is a slow acoustic number with the three core instruments, but the vocal dominates in its essentially spoken narrative running above the looping melody, and other voices join the singer with random how longs and a gradual general groaning mimesis. Truly far out.

Third track Forever Angels Proud is the only real clue to the band's origins/background: clearly a bunch of freaked-out bikers, and the song is as hot as the chilli dogs, baked banana and beef taco mama crawling over me invoked in its lyrics. Howling humans and hollering hogs [and Hogs] take over in a barnyard and bike race/rocket launch cacophony at the end. Even more far out.

Fourth Laugh introduces some squealing electric guitar over the superb bass, but the song fades out suddenly as the guys simply decide to stop. Sixth Limousine Ride  reintroduces the electric guitar with some superb psychedelic playing and use of echo, and sixth Billy Bad Billy, an apparent tribute to Billy Bonney [don't call me 'kid'/don't call me nothin' at all], sustains the badboy bikers celebrations as well as transport listeners even further out wherever. Eighth Chinese is a Morrisonesque shouted and demented narrative over guitar and bass. Ninth Red Dog is remarkably conventional as a slow blues, and the most Beefheart-sounding in that amalgam already mentioned. A brilliant noise with more howling.

Closer Old Charlie returns to the acoustic playing of the album's start but is a relatively rough ending to an otherwise rousingly raw whole. How I would love to have known this in the 70s because I can imagine the buzzing impact its musical psychedelia and irreverence would have had - though recently when listening on earphones in my middle-aged, middle-class walk to Sainsburys, it infused the bourbon I was after with fresh circuitry for the later if differing trip.

[*] There's some engaging if esoteric online debate about whether this was recorded in 1971 but not released until 1980 as a limited private pressing, or indeed recorded and released in 1980. The mythologising roars to life like a Harley when some suggest the vocal is actually Jim Morrison who never died! Too far out.
Posted by Some Awe at 15:25