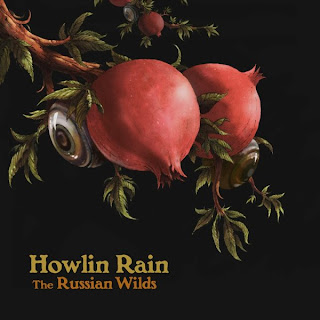 If oxymoron be the food of music, play on. What we have here are the fresh sounds of the 70s as Howlin’ Rain retroplay their latest reincarnation of West Coast, Southern Rock, Metal and Funk music.

Self Made Man kicks off the album with a Black Sabbath riff that quickly erupts into a Country Rock/Heavy Rock number of harmonising vocals, raw lead vocal interrupting, sweet guitar echoes, then resonating lead: not the mash-up it sounds, but a weaving together of sounds that rise to a brilliant harmonising climax. It is eclectic excellence, and we’re only on the first 8 minute track.

Second Phantom In The Valley is a prog-rock amalgam of operatic vocal harmonising and Hammond organ grandstanding that swirl around within the other swirl of instrumentation and singing, until 4 minutes into its total of 7 when we are samba-danced to a Santana Latin beat – all drums and soaring horn with other synthesised sounds spiralling around.

Third Can’t Satisfy Me Now is all Black Crowes and their own lineage of funked-up soulful rock. Terence Trent D’Arby’s ghost haunts here too. Cherokee Werewolf saunters sassily in at fourth with its Southern Rock banners fully furled.

Strange Thunder is the fifth track and the raunchy rock is tempered to a diametrically opposed soft and melancholic ballad [about suicide] sung in falsetto drifting over acoustic guitar – until 5 minutes in and again we have a change as a thudding beat leads the dual guitars in [Ethan Miller and on-loan Earthless’ Isaiah Mitchell] and the vocal reaches for those rock harmonies once more to rise along its thumping and climbing climax.

Sixth has Miller growling his retro-rock vocals to more funky guitar slaps on Dark Side. It’s consummate if derivative stuff - and I like it - but I know other listeners have baulked at the intensity of the revisiting. Yet from Comets On Fire to this third Howlin’ Rain release – four years in the making with Rick Rubin providing part of the production, and, as some complain, procrastination – we should know by now that there is inevitably going to be a reverential replay of the 70s: you either want to take that time-travel or you don’t – and assuming you do, the transportation is accurate to a microsecond. Eighth Beneath Wild Wings sounds like Smokey Robinson until it again picks up the rock pace and harmonising. Ninth, a cover of The James Gang’s Collage [without the orchestrated strings], seems homage to Crosby, Stills and Nash and other West Coast vocal perfection, and is, I think, beautiful.

The album ends, perhaps unusually, on an instrumental with track eleven’s Still Walking, Still Stone and it is about as far-out as you would expect by now. At 60 minutes The Russian Wilds is musically flamboyant and grandiose, and the band – perhaps mainly Miller – ferociously hoards and plays its collectible sounds as if they might escape forever if not all used in this one extended moment. 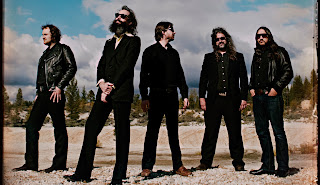