Chris Gantry - At the House of Cash, album review 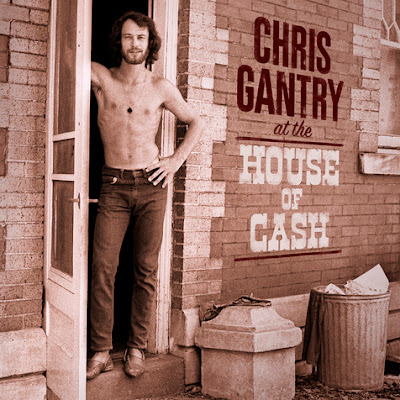 This is a 1973 album that never got a release until now and one can understand the oddities that prevented its support at the time, not that there weren’t more obvious examples of eccentric music then – experimental and psychedelic – but this was recorded in Nashville, and it would seem the cowboys at large were not comfortable in its saddle.

No such problem today, though it has its inconsistencies. A track like See Ya Around is typically idiosyncratic, the closer on the album and only 1.22 long, and its jazz-like acoustic guitar rhythm and directionless lyric wouldn’t win in a hit parade, whereas Clair Oh Clair is a beautiful folk melody, sweetly played on acoustic guitar with George Martin-esque strings accompanying, and it highlights Gantry’s fine vocal.

The two opening tracks Away Away and Different are strong songs, the first with some funky organ and other electronic effects fitting the early 70s well – indeed it is a complex but clever song, yet again not ‘classic’ Nashville – and the second is a gorgeous melody with sweet pop orchestration of the time that one could imagine being very popular – the vocal perhaps veering to the unexpected, and it reminds of Tim Buckley at his more adventurous.

Then there is third track Tear which is a spoken word/poetry – with sitar – song, and it is peculiar, musically and lyrically, not mainstream, and not Country in the way Johnny Cash who covered one of Gantry’s songs was. There is another spoken word song Hatred for Feeny and this too would have alienated an audience with other expectations from an artist who wrote the hit song Dreams of the Everyday Housewife for Glenn Campbell.

So this mixture could still be difficult for listeners today, especially if the more melodic and pop-orchestrated numbers are the singularly desired. But for a beauty like Clair Oh Clair, it is worth the saddle slipping now and again. Email ThisBlogThis!Share to TwitterShare to FacebookShare to Pinterest
Labels: album review, Chris Gantry - At the House of Cash