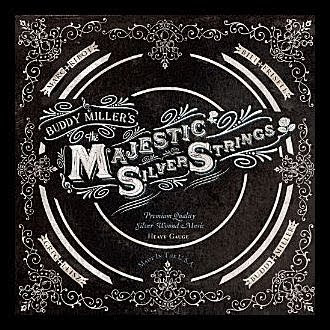 Four Axemen of the Country Licks

Chairman Miller presides over a true socialist state of music as this album presents a collective of talents rather than a singular showcase. Not surprising as Buddy Miller so often acts as producer and support performer to the likes of Emmylou Harris and Steve Earle, but the spirit of this musical community is further represented in the guitar quartet of Bill Frisell, Greg Leisz, Marc Ribot and Miller himself who share, without a shred of solo showing-off, expert duties: the majestic silver strings of the album's title. The communal cast is then enhanced by the songstresses Ann McCrary, Patty Griffin, Lee Ann Womack, Shawn Colvin, Emmylou Harris, and wife Julie Miller.

The album itself is a great mix of traditional country, blues and dark ballads. The opener 'Cattle Call' stamps its authentic old-time country seal with Miller's understated but assured howling and yodeling. This could scare off the lightweights who only dip delicate toes in New Country, but for those who appreciate Miller's Country eclecticism it's one of many perfect delights on the album. Other highlights are Ann Lee Womack's maudlin if disturbingly comic 'Meds', the stomping blues of 'Dang Me' with Chocolate Genius, an atmospherically haunting Marc Ribot on the album's longest song 'Bury Me Not on the Lone Prairie', the wonderful Emmylou Harris singing 'Why I'm Walkin'', and my favourite, Shawn Colvin's crystal clear rendition of Frisell's beautiful ballad 'That's The Way Love Goes'.

The guitar backdrop throughout is brilliant as one would rightly expect. It simply sounds like it has been played with huge enjoyment. I'm not expert nor assed enough to work out who plays what when: the mix of slide and steel and acoustic merges into its majestic whole.

I love Miller's full and booming voice and that's the only element lost [a relative term] in his generous withdrawal from the spotlight on this album. He fronts two or three songs, and there is some Buddy harmony, but I would always love to hear more, especially like when that gruff distinctiveness harmonises with female vocal on so much of his previous contributions across so many albums, not least with Julie Miller, and the two close this album on a perfect example of what I mean with their performance of 'God's Wing'd Horse'.
Posted by Some Awe at 16:43