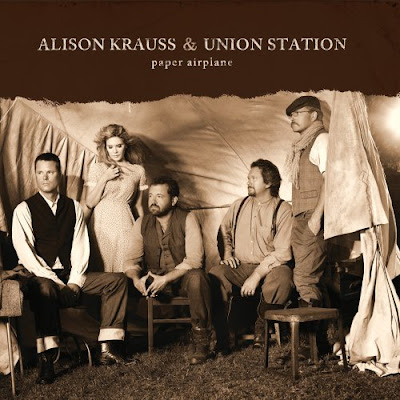 What it says on the tin: vocal, fiddle, mandolin, bass, banjo and dobro

The group's posing for this album cover is the most stylised feature of an otherwise simple and unaffected offering.

Paper Airplane is predictable in delivering classic soft and soothing country from Krauss' tender vocals and the immaculate instrumental support of Union Station. The album is to a degree a two-parter with songs proferred by Krauss' sweet singing, and those from Dan Tyminski's more bluegrass vocalese and barn-dance leanings. Nothing new here, and in a sense that's why we like what is performed, time and time again.

A good example of what I am characterising is the unadorned rendition of Richard Thompson's 'Dimming of the Day'. I was waiting for the AK&US hallmark harmony vocals to reference those so vital in this song's original emotive impact, but apart from the gesture of one subdued shared line, the song is a Krauss solo played straight and true and simply. Again, nothing new and nothing wrong here. It's just something I noticed and thought about.

Indeed, the only question one would ask of this perfect latest release is why isn't Alison sharing the shared stare of the others on the album's cover? That's a real poser.