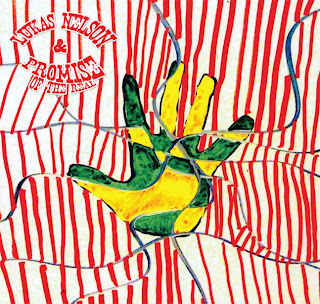 I want to say something about 'country' pedigree as well as familial pedigree, but I'll do that later. In referring to the family kind, I will step into the muddy pool of hypocrisy because I have argued against tracing parental links in judging musical offsprings. But that was always simplistic and ripe for review, as now.

Lukas Nelson, son of Willie, will have had the most amazing musical nurturing as well as any genetic influences, being around in the touring with Dad and Johnny and Kris and Waylon.

Lukas' album is more rock than country but the latter influences are there as is the Nelson voice - environment and genes playing their dual roles. This album is a great listen, with stand-out rock tracks like 'Toppers' and 'Pali Gap - Hey Baby (New Rising Sun)', the latter presenting wonderful guitar work. There are a couple of beautiful ballads too, 'Sound of Your Memory' [with Willie providing some background vocal] and 'Don't Lose Your Mind'. Lukas' voice is distinctive enough, but the 'pedigree' is also evident - a familial trace that is what it is: natural and true.

There is a moving song 'Fathers and Mothers' that foregrounds the very influence I am writing about. It isn't musically the strongest track on the album, but its sentiments about honouring family - which is universalised, perhaps a little simplistically - are rooted in a history that has impact because the Nelson name has been in the public eye for such a long and impressive time. It adds another nuance to this fine album.
Posted by Some Awe at 11:50