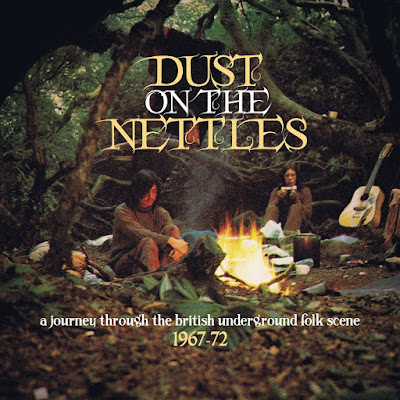 That's Dust with a D and a T

Precise pronunciation is one of the more glaring differences of the female vocals on much in this collection when compared with the slurred affectations of contemporary female singing, a generational battle between sibilance and sassiness. Barbara Gaskin seems to click the consonants into place on her delivery of Love is a Funny Thing by Spirogyro, the fourth track on cd1.  Its first track, the well-known and still startlingly fresh Let No Man Steal Your Tyme by The Pentangle, is no less articulate, Jacqui McShee exacting in her enunciations.

It’s not until Vashti Bunyan appears on eighth track Winter is Blue that the sonic spell is broken, her whispered idiosyncrasy as vocalist diverting from the seemingly rarefied singing mode.  Next, Comus further detour from what is actually an Englishness as much as gender defined sound with their more gregarious playing on Winter is a Coloured Bird, and we realise what a genuinely rich musical tapestry British folk was at the time of this compilation’s coverage. And in between these poles mentioned, there is also a sampling of what I’d call naïve folk: a little discordant and even naff but nonetheless appealing for its honest, unadorned presentations from the likes of Magnet and Wight.

Indeed, on this cd and across the other two there are further dichotomies of precision, whether singing, instrumental and/or songwriting. There are stalwarts like Bridget St. John, Fairport Convention, Dando Shaft, Principal Edwards Magic Theatre, Steeleye Span and more – and then there is Clive Palmer. That’s not a criticism of the latter: there is a full spectrum of polished to raw folk, because that is what there was. And it is an excellent selection of that.

Best track on all three? The Garden of Jane Delawney by The Trees. Closely followed by There Are No Greater Heroes by Tony, Caro and John [1972 album reviewed here].
Posted by Some Awe at 16:46

Email ThisBlogThis!Share to TwitterShare to FacebookShare to Pinterest
Labels: Dust on the Nettles – A Journey Through the British Underground Folk Scene 1967–72