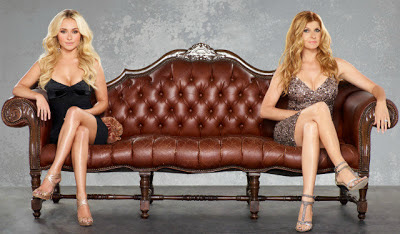 The second episode of naff Nashville has consolidated its full appeal for me. In plot terms, little has advanced from the first outing, though the character dynamics have been fleshed out a little more, and literally in the case of Juliette Barnes and her short shorts. However, as a network production rather than HBO, it is constrained by well-established American prude-filters. This being the case, the gratuitous portrayal of cool cars usurps the titillation of homo sapiens, with Barnes again employing her seductive but now automotive charms on Deacon Claybourne [Rayna’s lead guitar player and former lover, now Juliette’s prey both for his guitar playing and manhood, though the latter is, as I have made clear, an implicit reality] by picking him up [right in front of Rayna, if you can believe that!], in a gorgeous blue vintage Chevrolet pick-up truck. To be fair, she has also tempted him with a $50,000 1930s Marshall acoustic guitar. And to be fairer still, he is prevaricating, but has bonked her [though we have had to deduce by imagining it].

There is the Dallasesque plot machinations of Rayna’s nasty capitalist father Lamar Wyatt – and I’m not sure who the good ol’ capitalist will be, but there will have to be one, naturally, being America – and that’s perfectly acceptable as it is to be expected. You can’t have a programme on Country music alone. What I am struggling with is the marriage of Rayna to the wet Eric Close, but that’s more to do with the fact that the fourth series of Friday Night Lights is being shown too at the moment and in that opening episode Connie Britton, now as Principal Taylor of Dillon High, is still passionately and romantically and totally believably behind her one true husband Coach Taylor even though he has just had to take over the coaching position at the run-down East Dillon High.
Posted by Some Awe at 22:11