Holly Golightly & The Brokeoffs - Sunday Run Me Over 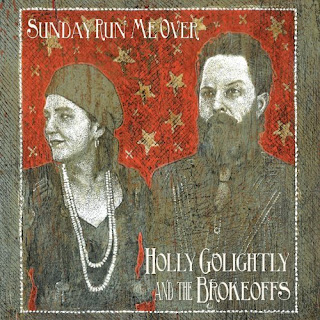 Goddamn This Holy Shit Is Fun
This record is a lot of fun and may be the genesis of a newish genre: punk’n’drunk waltz-bluegrass, encapsulated in fifth track  One For The Road, though it could be argued that with a song like this The Holy Modal Rounders and The Fugs have been in similar territory many years before. The difference is the punk-country of other music on this record, like opener Goddamn Holy Roll. Then there’s the ol’ time Country revival of the 1953 Davis Sisters’ song I Forgot More, and another authentic cover A Whole Lot More [originally A Whole Lot More of Jesus (and a Lot Less Rock and Roll) by Wayne Raney in 1960]. One other cover to mention is Mac Davis’ Hard To Be Humble, sung proud and loud by Lawyer Dave who is one half of the duo that is this band – the other being Holly Golightly - and this gets an update where at its start Dave and Holly ‘share’ Facebook hate messages about one another: a rather obtuse contemporising. The album ends on a punkstomp This Shit Is Gold which isn’t quite an intended summation of the whole, but in many ways the overall playfulness is its core value, whatever worth you place on that. I’m sure it was as much fun to record as it would be to hear live. 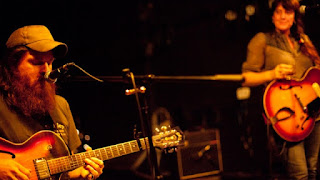 Email ThisBlogThis!Share to TwitterShare to FacebookShare to Pinterest
Labels: Holly Golightly and The Brokeoffs, Sunday Run Me Over