Joe Byrd and the Field Hippies - The American Metaphysical Circus [1969] 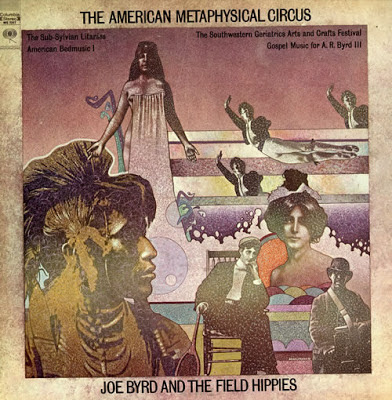 Occasionally Far Out There

As far out goes this is out there quite far, though at times the folk, symphonic and even light operatic forays present conventional snapshots – the convention being that ‘psychedelic’ music of this time would include these elements either as pastiche or a more complex amalgam of sounds and styles. But I have to stress that the faroutness is largely encapsulated in the opening track Kalyani where the electronic jamboree is truly adventurous and spacey. This and the next two tracks form the album’s richest musical variety, given the umbrella title The Sub-Sylvian Litanies, with tracks two and three called respectively You Can’t Ever Come Down [presumably referring to LSD] and Moonsong: Prelog. After this, the genre-hopping gets a little tedious. There is a four part ‘political’ sequence with the over-arching title of American Bedmusic - Four Dreams for a Departing President [LBJ], and the first Patriot’s Lullaby does employ operatic playfulness for genuinely engaging effect. The fourth Mister 4th of July, however, employs a scratched ragtime musical motif – inexplicably popular for psyche groups of this time, and I’m not sure why – and this weighs heavily on that tedious side. Indeed, these jolly excursions into other conventions mar for me whatever satire is in the lyrics – because they are so hard to discern. Tenth track The Elephant at the Door returns to a more psychedelic mood/mode, and this seems like a clear precursor to the sound of Principal Edwards Magic Theatre. It is a powerful song leading to rising female vocals, jazzy horns and swirling organ grooves, then dissonant horns. It’s an appealing if uneven album and of clear interest to those, like me, who first heard Joe Byrd in his group The United States of America on the CBS sampler The Rock Machine Turns You On and their whimsical track Wooden Wives.

Email ThisBlogThis!Share to TwitterShare to FacebookShare to Pinterest
Labels: Joe Byrd and the Field Hippies, The American Metaphysical Circus