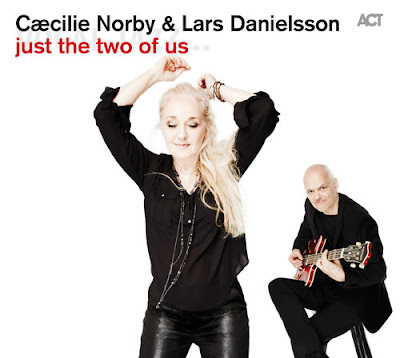 Danish jazz chanteuse and, as it happens, her bass playing and producer husband – respectively, Cæcilie Norby and Lars Danielsson – have created a fine album of classy voice and bass songs where there is generally minimal additions to this focus, only, for example, light and distant ambient orchestration on Liberetto Cantabile [though it builds just a little at the end], and occasional percussion to hold a beat as on Sad Sunday. Danielsson plays variously electric and double bass and his virtuoso skill provides a singular – in most cases – platform that is striking in its ability to carry the instrumental duties. The best example of this is opener Both Sides Now, Joni Mitchell’s song, where the bass cascades prettily beneath Norby’s full and precise vocal. Cherry Tree is sung beautifully over an acoustic guitar, but the simplicity, and excellence, is maintained, though the niche sound on this album is that core voice/bass combination, as on And It’s Supposed To Be Love where some extra vocal overdub, finger clicks and slapped bass provide an element of funk. I like the scatting and other vocal playfulness on Wholly Earth, which is then followed by some gorgeous bass and acoustic guitar on Sarabande, a short and delicate instrumental track of calm and peacefulness. The full, impressive range of Norby's vocal is expressed on closer Hallelujah, again over superbly plucked bass, and its brief move into the operatic is perhaps in tribute to her mother who was an opera singer.

Email ThisBlogThis!Share to TwitterShare to FacebookShare to Pinterest
Labels: album review, Cæcilie Norby & Lars Danielsson - Just the Two of Us