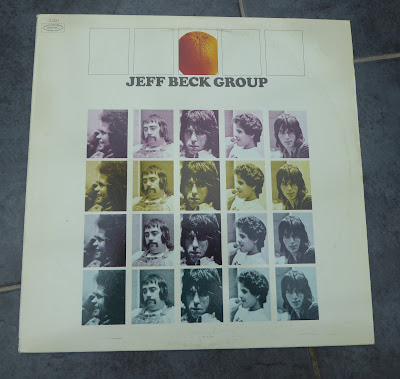 Released in 1972 and apparently receiving generally negative reviews at that time, I've been listening today to my vinyl copy I picked up in Portland, Oregon a few years ago, my first listen of this record.

I was immediately impressed with the vocal of Bob Tench on opener Ice Cream Cakes, and of course Beck's guitar work throughout is distinctive. Other favourites are the Beck/Steve Cropper penned Sugar Cane - Cropper having produced the album - and it is not surprisingly a funky number; then on side two the excellent cover of Don Nix's Going Down and finally closer, the wonderfully whining guitar instrumental penned by Beck, Definitely Maybe.

Best of all is the hearing on my record player: I never need reminding but have to make the effort more often to enjoy the dynamic sound quality of vinyl, its depths and in this case, as with many recordings of the time, the stereo playfulness where music dances across and in and out of speakers. You know what's coming next -