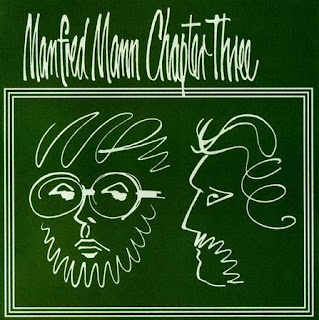 I could quite easily get lost in the Vertigo label's psychedelic swirl and spin out a large number of its acts for my Top Fifty. But one that definitely earns its place there rather than from some dizzily spun projection is Manfred Mann Chapter III and the band's eponymous album released in 1969.

Formed by Mann and long-time collaborator Mike Hugg, this is a wormhole hyperdrive away from the popworld of Manfred Mann's previous music, and it transported me up and beyond within its cosmic, jazz-infused launch at my tender age of 15. I'd been listening to Archie Shepp, Ornette Colman, Charles Lloyd and other 'modern' jazz at the time, and it's the saxophone solos that appealed first in listening to this album. Mann's instrumental Konekuf is a big band number that starts with a slow rising melody akin to Strauss' Thus Spoke Zarathustra but it breaks into a sax and brass cacophonous free-for-all that I thought then - and still do - was brilliant in its wild and angry squeals and screaming. Saxophonist Bernie Living was a core member of the band, but additional sax players were Clive Stevens, Carl Griffiths and Dave Coxhill, so I'm not sure which of those first three [Coxhill playing baritone] is responsible for the solo on this amazing track.

Opener Travelling Lady, which began life as a Hugg popsong in the mid sixties, displays the quieter and more melodic aspects of the album, but this too breaks into a freeform jazz saxophone display. Snakeskin Garter, as far as I can recall, was also used in an advertisement for some men's cologne. This song, as with most of the others, has Hugg on whispery-gruff vocals and this provides a rather sombre, though for me totally apt tone to all of the tracks.

I got this album when I was in the fifth year of my secondary modern school on a large sprawling council estate. I've written before about my positive experience of attending this school, and also of having a track from this album, Mister Your're A Better Man Than I [composed initially for the Yardbirds in 62/63], played in our house assembly, done so by the rather formal but nonetheless niceguy Housemaster who then sermonised on its lyrics which were to do with human inequality and therefore 'meaningful' for an assembly. I was proud of introducing that song to my more popster peers.

Another school experience also involved this album. Although a secondary modern, the school still harboured pretentions based on grammar and public schools so it had a house system: six different house names accommodated within three separate but replica round buildings, each single building split in half. Another aspect of the architectural and structural aping of such a traditional system was that all students in the fifth year had their own separate common room within each of the six houses. I belonged to a small group of incipient hippies getting into underground music and we used to bring our albums into our common room and play them on the record player there. This had the effect of driving most of the others away, especially when listening to an album like Manfred Mann Chapter III [or a Black Sabbath or similar] where we sat in our corner being introspective and cool and earnest and headbanging.

There was a volume two of this band released in 1970, and other live and demo additions, but the band could not be sustained because of its size and the wilder jazz of its musical ethos, and so Manfred Mann Chapter III disbanded and became the Earth Band in 1971.

Whenever I fancy a self-inflicted musical mindmess I play Konekuf very loud. To consolidate that mental tribulation you could play it just before or after Do Wah Diddy Diddy and experience what happened to the Manfred Mann musical timewarp continuum!
Posted by Some Awe at 15:57