No Frills All Spills Airline 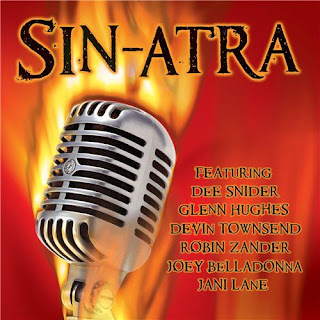 It's all about the approach. If you want to land in a predictable neat and tidy straight line, then that's fine. If you don't give a shit about doing things by the book, then you won't be surprised if you crash and burn. I've had to smile at a few Metal sites that pan this album for being 'over the top'! Talk about pompous platitude - get a grip on your down-flaps guys and gals. If you approach this album expecting some serious and revealing symbiosis of heavy metal and Frank Sinatra, then you're chancing things in a pre-Orville and Wright contraption [if you'll excuse me screwing around with my aeronautical metaphor]. This is as brash and chaotic and contradictory as any trained pilot could expect when flying into a known turbulence, and that's all part of the fun of the ride. For goodness sake: this is hype-propelled, fuel-leaking, flaps-flapping, undercarriage malfunctioning, but entertainingly by-the-pants musical flying. Grab a drink already half-spilt by the stewardess tumbling past your seat, turn the volume on full so you can hear through the one working headphone, and get ready to make your own entertainment as the in-flight movie goes blank on the screen. You might only fly with this airline the once, but it will give you a wing-span smile. Here's the pilots' and ground crew roster:

Email ThisBlogThis!Share to TwitterShare to FacebookShare to Pinterest
Labels: SIN-atra: A Metal Tribute to Frank Sinatra