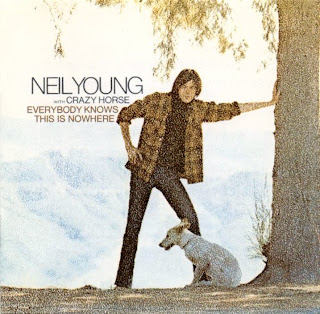 Neil Young with Crazy Horse - Everbody Knows This Is Nowhere

I have neglected my Top Fifty for a while and therefore am returning now with a gem and the jeweller. I have selected another 'obvious' choice in as much as who wouldn't/couldn't have this in their favourites at some reasonably high ranking?

This album was my initial introduction to Neil, and I didn't in fact hear his eponymously titled first album until much, much later. I also discovered this big bang release whilst staying with a friend in his Putney flatlet in London - a small home behind the toys, sweets, cigs and newspaper shop he ran at the time [his parents', but him in charge, precariously]. I discovered loads of music in that place, along with much else, and when I look back it was an amazing, impressionable and exciting time - I was 16 years old and entering an occasional world where everyone else was in their early twenties and much more experienced than me. What a journey.

The album was designed to appeal to someone like me, and so many others. It opens with Cinnamon Girl and those simple power chords and bass setting the pace, then the beautiful harmonies co-producing that perfect symmetry of heavy rock with folk vocals [noting Stephen Stills' apparent long-standing and bitter  criticism of Young's involvement in CSN&Y because he wanted to play folk music in a rock band]. Next track Everybody Knows This Is Nowhere introduces the Country element a la Gram Parsons and The Byrds, an inclination to twang that resonated in my American bones.

Favourite has to be third track Round and Round [It Won't Be Long] - everything about the roundness of its title, lyric and slow loop of a song structure hypnotising as you listen. Then there is the beautiful poetic tone of the lyrics

and the assonantal words lull and calm and comfort the teenage heart!

Side one closer Down By The River oozes its cool, the bass-line and funky chord core laying down a smooth strut and stroll for Young's signature fuzzed-out guitar to dance and shriek upon throughout; and then again the gorgeous harmonies. All praise to band Crazy Horse for its central contribution.

Side two opens with the other countrified number The Losing End [When You're On] and I wonder if this alienated any listeners? Never this one. Sixth track Running Dry [Requiem For The Rockets] is a wonderful folk lament with its melodramatic violin strain [Bobby Notkoff from The Rockets and Electric Flag] and the echoed guitar.

The album ends on another Young classic Cowgirl In The Sand, all sublime vocals and guitar jam igniting the rockharmony universe with its emerging and decades' forming planetary system of memorable albums and the still-rockin' great, great artist that is Neil Young. 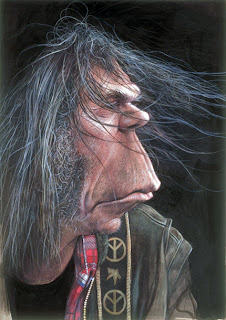