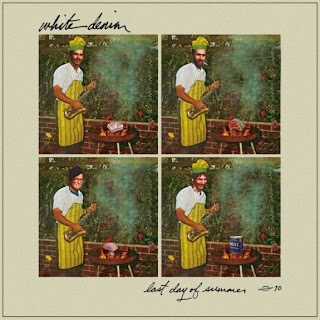 I reviewed White Denim’s D with positive observations on the musicianship and echoes of 60s/70s’ performers, and recently placed it in my 2011 favourite albums’ list. Last Day of Summer was initially a freebie via the band’s website, but is now released officially, and it is more of the same but with a sustained pop sensibility. It is, apparently, a collection of songs worked on since the band’s formation in 2006, and whilst some reviewers have seen the collection as slightly disparate, I hear, as I’ve said, a consistent and enjoyable pop playfulness underpinned by lush harmonies and busy instrumentation.

Opener I’d Have It Just The Way We Were is a swirling pop tune with those vibrant harmonies and a psyche, Randy Californiaesque guitar break. Next Home Together is similarly inspired with an organ core and those sweet vocals. Fourth If You’re Changing foregrounds the Tyrannosaurus Rex echoes I heard in D. There is an instrumental lull of sorts for tracks five and six, and seventh Some Wild Going Outward presents a more complex but still swirling, melodic songwriting and performance. The remainder continues with the T-Rex sound and this, for me, is part of the overall charm. The album ends, oddly, on an anonymous indie tune New Coat.
Posted by Some Awe at 16:28