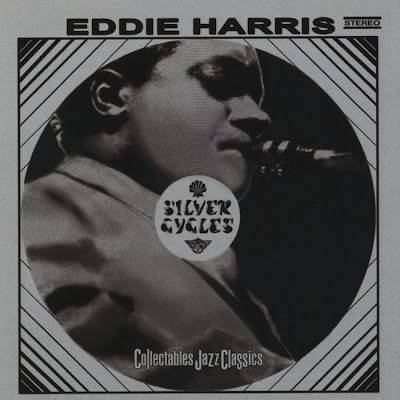 This is a treasured jazz sax album, largely because I have had it since I was a kid, but also because of its exuberant and at times psychedelic playing. I can't remember how I came across this one - I suspect back to that Woolworth's chrome-caged album bargain bin that offered up so many fortuitous gems: how I'd like to transport myself back with a few bob to purchase some more!

The album begins with a Latin American vibe, and remarkably traditional sound, on Free At Last, led off as it is by percussion and piano. Harris comes in to ride the melody in light staccato bursts, so very much a pop opening to an album that gets groovier as it progresses. Next track 1974 Blues is more a big brass band number and is again quite pop-blues in its melody and Harris' playing. It's third track Smoke Signals that takes off for me, with Harris playing his electric saxophone, using a Maestro amplifier and Echoplex, the latter to get the same echo and loop effect John Martyn did on guitar. There is an amazing amalgam of this psychedelic sound and an ethereal female vocal chorus that sounds like a Star Trek theme being sung in tandem with Harris' actual far-out playing. Fourth track Coltrane's View also appealed at the time with my fledgling interest in John Coltrane's work, and Harris' straightforward [excuse the oxymoron] playing of the Coltrane sound is another great track: brooding and building to an insistent free-form blow out. Fifth track I'm Gonna Leave You By Yourself exemplifies the album's eclecticism, with a soul-groove supported by uptempo orchestration and vocal backing chorus. This leads into the title track where the opening bass is put on a loop leading to simple percussive beats, including hand claps, until Harris' Varitone gently adds its own pulse of repeated lines, pushing these to the top register to squeal out in their echoing. The bass and percussive stabs continue throughout, until the baritone notes [electrically generated?] come in to ride out the background swirling. Seventh Little Bit is a fast number with Harris again on electric saxophone and, as the album liner notes state, it is therefore possible to play new melodies over the basic motif recorded previously. While these two lines are played back, a third melodic line can be added and a "sax choir" effect is achieved, and this is put to further interesting effect in the brisk and penultimate track Electric Ballad which is just Harris and has a classical motif. The album ends on a relatively conventional number Infrapolations giving conventional solo spots to bass and drums - that is, until near the end where this breaks out into more free-form and electrical musical mayhem. It still is now, but those were brilliant teenage listening days.
Posted by Some Awe at 18:01